I am the kind of traveller who likes to be prepared. Prior to our arrival in India, Chennai to be more precise, I’d done a lot of research and felt organised. I knew what to expect, where to go and what we needed to do. However, as I quickly learned, this was India and I wasn’t prepared for what was to come at all. After an uneventful but tiring flight from Glasgow with Emirates via Dubai – a great airline by the way – we slowly made our way through Chennai airport to immigration clutching our hastily completed but vital immigration forms that we found purely by chance, our passports, eVisas and address and owner’s name of our first hotel. Literally everyone on our flight missed the tiny little hand written sign telling us to go to Tourist Arrivals on the left and we all followed the crowd and went right instead. After a 30 minute wait in a stationary queue an official-looking chap decided he should leave his chair to walk over and tell us that we were all waiting in the wrong place. Like obedient sheep we all walked back the other way so that we would wait in another queue that somehow moved even slower than the first. As it was taking at least ten minutes per person to process through passport control, and there were 25 people in our queue, we were going to be here for a long, long time.

Several hours later we located our luggage, by now spread throughout the arrivals hall, but miraculously still there after all that time, and made it out of the airport and into the noise and chaos that would completely overwhelm me for the next 28 days – my god, why hadn’t I come across a mention of this in my research? How can anywhere be so relentlessly noisy? When Indians use their cars it isn’t like any other driving I’ve experienced. It is less like driving and more like a fast rafting experience, where the idea is to flow along with everyone else whilst trying to constantly get in front of the car ahead of you, even if it would offer absolutely no gains whatsoever. It is acceptable to maintain a distance between you and the adjacent vehicles of around 6mm so knowing the precise width of your vehicle is key.

I’m not exaggerating when I say that many, many people drive along the potholed roads with their horn on 100% of the time through junctions and around bends. Worried someone will hit you? Use your horn. Worried that someone hasn’t seen you? Use the horn. Slight curve in the road, pothole ahead, cow in the way, car in front going too slow, pedestrian with a death-wish contemplating crossing the street, traffic lights just turned red and you need to warn a bunch of old ladies that you’re going to drive on the footpath, nothing else to do with your fingers? Use your horn. Add this to the fact that it is one of the most populous countries in the world where everyone seems to be going somewhere all the time and you have a lot of horns. Within about 5 seconds I hated it and after a few days I’d have literally given all my money to the Bose shop (had I been able to find one) for a set of their noise cancelling headphones.

Chennai was a slightly odd place, fascinating to us because it was still India at the end of the day, and therefore totally different to our hometown of Glasgow, but it was hard to navigate and seemed to lack structure. It didn’t have an old bit, a new bit, a shopping bit, a middle bit or a touristy bit – it is an enormous chaotic jumble of very swanky buildings right next to piles of rubble and tarpaulin-covered huts, 10 metres of pristine pavement flanked either side by 50 meters of mud and piles of bricks and shit. Maybe we just weren’t making the most of it but we decided after a couple of days to hire a car and driver (about £50 for 2 full days through Savaari Car Rental) and head south to Pondicherry for a bit of peace and a change of scene.

Even though I was maxed out on travel sickness drugs we had to stop our driver after 30 minutes and insist that we weren’t in a rush and that we either went slower or went back. Even Fiona, who has a constitution immune to nausea, was looking peaky. The driver looked horrified. “You want to go slower?”, “Why on earth would you do that?” It didn’t really work and we continued to rocket along the coastal road south at 120 km/h as opposed to 125 km/h as though we were part of a computer game. It was crazy driving, and fast, but somehow you just have to put your faith in your knowledge that the driver had been making this trip for decades and knew what he was doing. Fortunately we stopped halfway at a place called Mahabalipuram (or Mamallapuram) where there was supposed to be a complex of amazing temples. In the end we only found a couple of the temples by the sea and wished we had hired one of the numerous expensive guides, but we thoroughly enjoyed being away from the city and by the beach.

One temple was so eroded by the waves that it was almost unrecognisable and the whole area was packed with Hindu pilgrims who had come to pay their regards to one of the many, many gods and also to take a dip in the sea. As a photographer I guess the temples didn’t really excite me much but I was fascinated by the little seaside community that had built up around the area – it was how I imagine British beach resorts were in the 1950s. There were stalls selling coconuts and men selling bags of candy floss. This being India there were also cattle, goats and dogs roaming around and naughty boys on horses who were basically the boy-racers of the beach. Perhaps as practice for their car-driving days that lay ahead, they enjoyed galloping their horses through impossibly small gaps in the crowds of pilgrims before turning and watching their friends repeat the same feat, but even faster.

The visitors to the beach were mostly women and they were all dressed in almost identical red or mustard coloured sarees. They walked into the sea in their clothes, cooled for a bit, and then got out to wander around and let their sarees dry off afterwards before heading back to their pilgrimage deathtrap busses that were easy to spot as they were completely decked out with holy neem leaves, much to the delight of the local goats, the tallest of which enjoyed a tasty snack. It was here that we first came across the phenomenon of having a selfie taken with a local Indian. All afternoon large families and young couples kept asking Fiona if they could have their picture taken with her. My wife is tall and, being Scottish, a shade of blueish white. She was a towering lighthouse in amongst a sea of small local people. She was an easy to spot target and ‘clicking a photo’ with anyone and everyone was to be a daily occurrence from now on.

You can see a collection of my India photographs here. 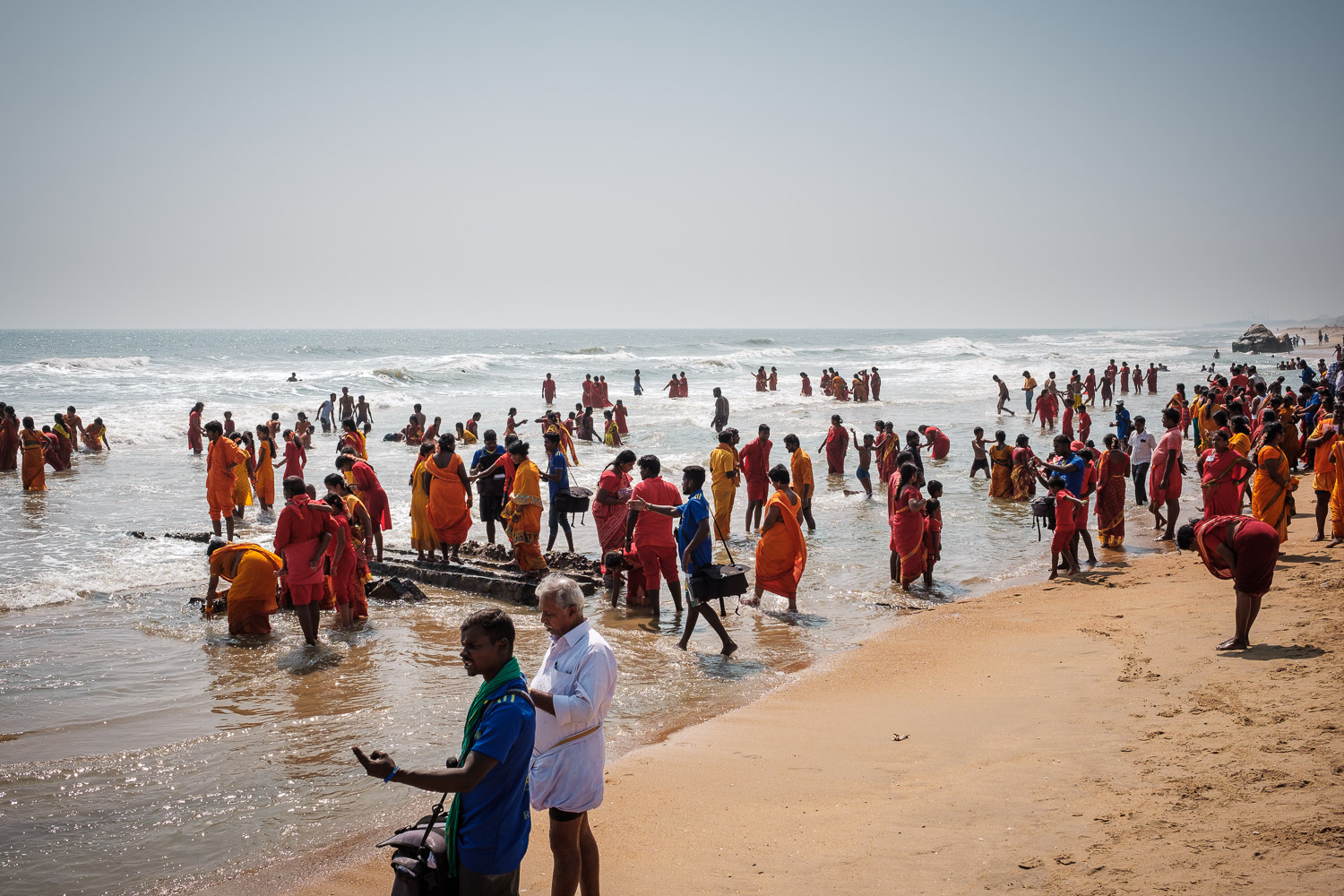 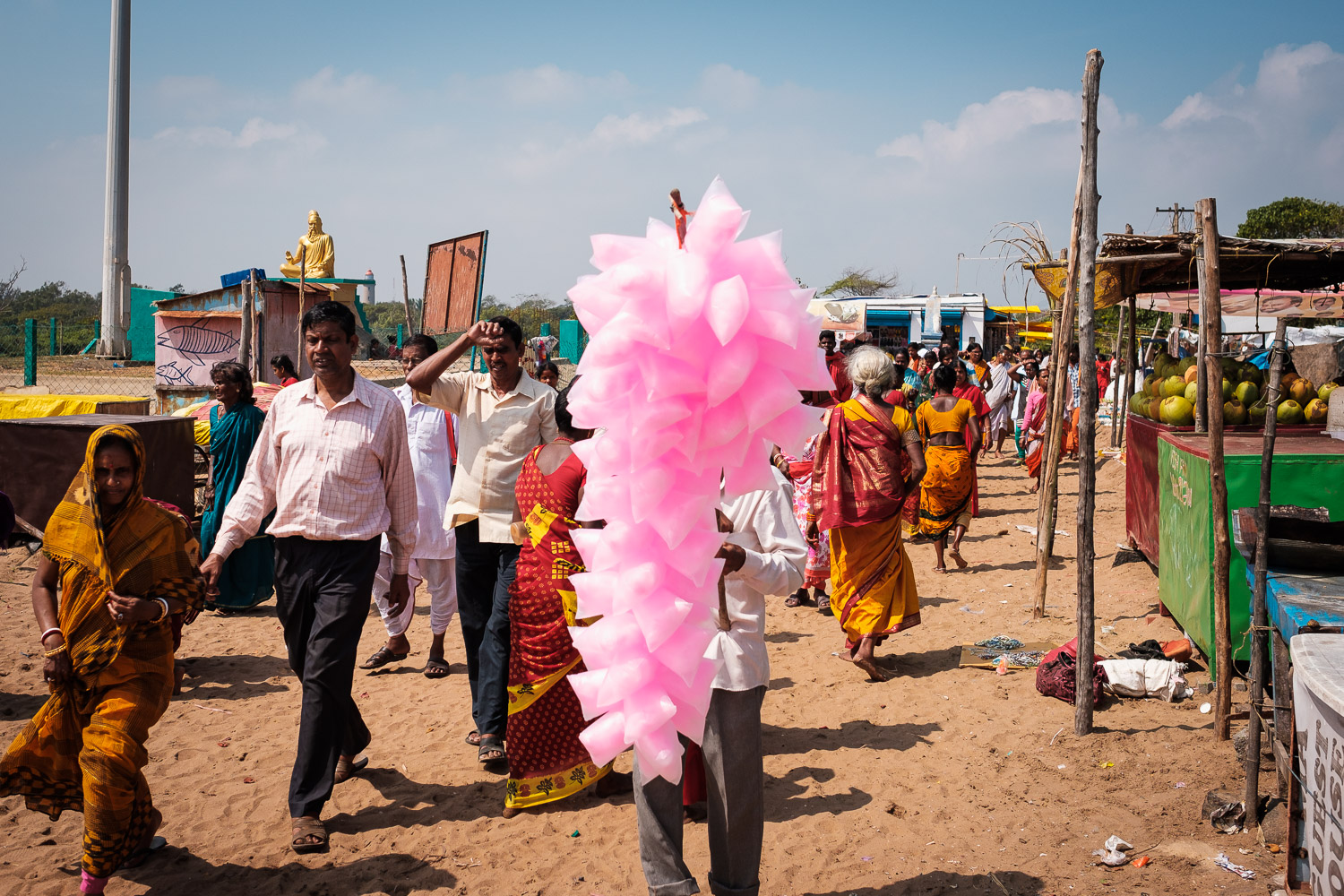 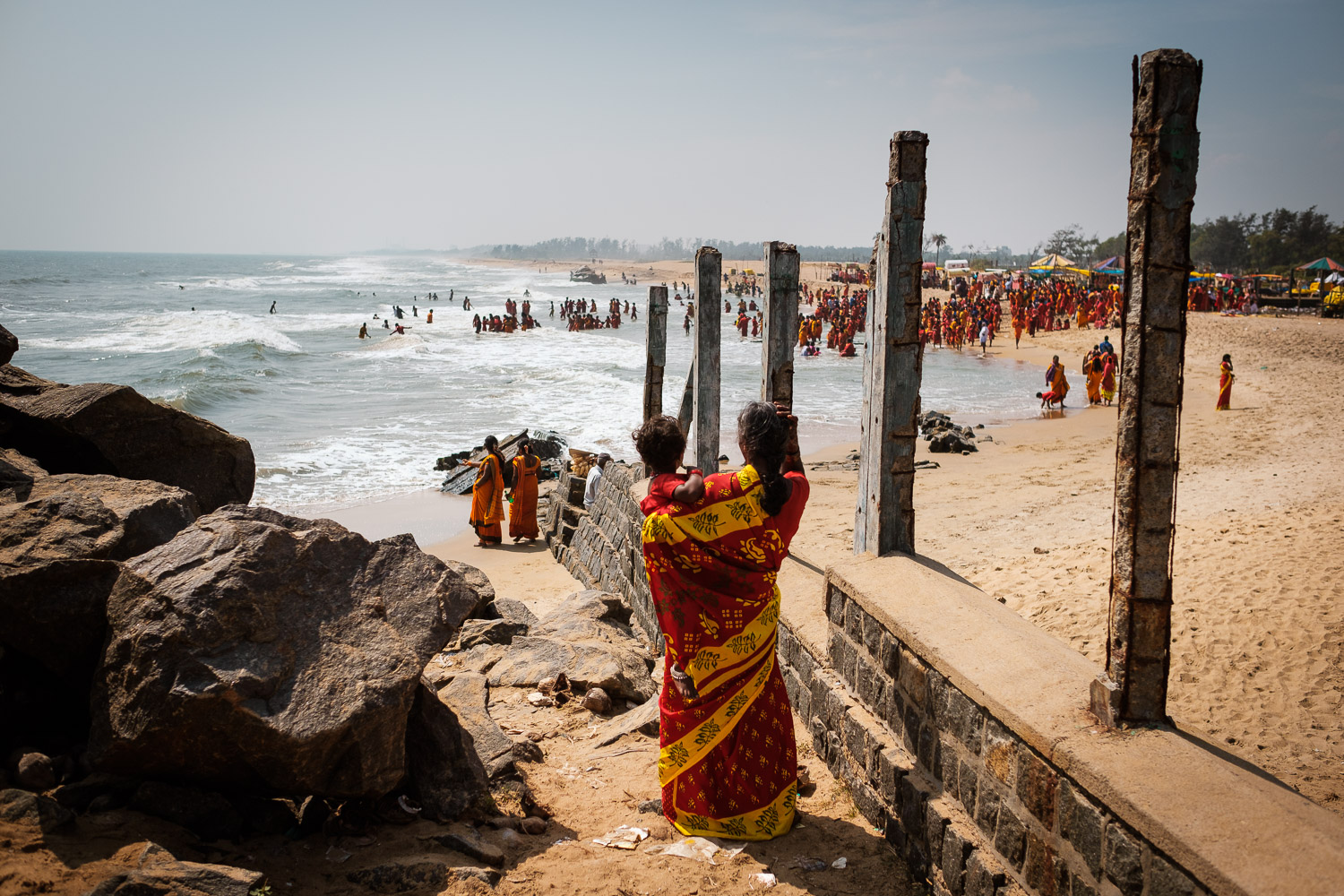 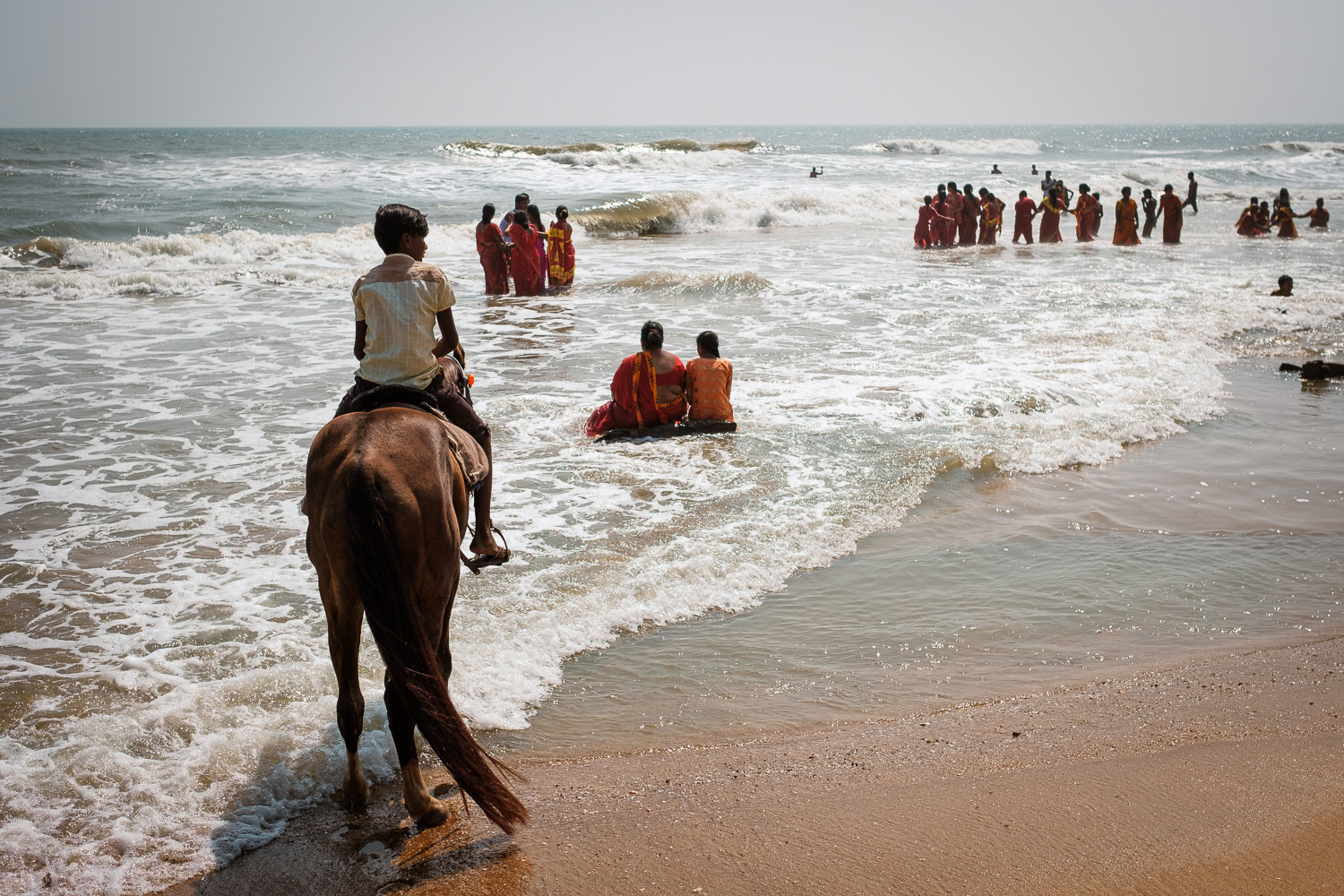 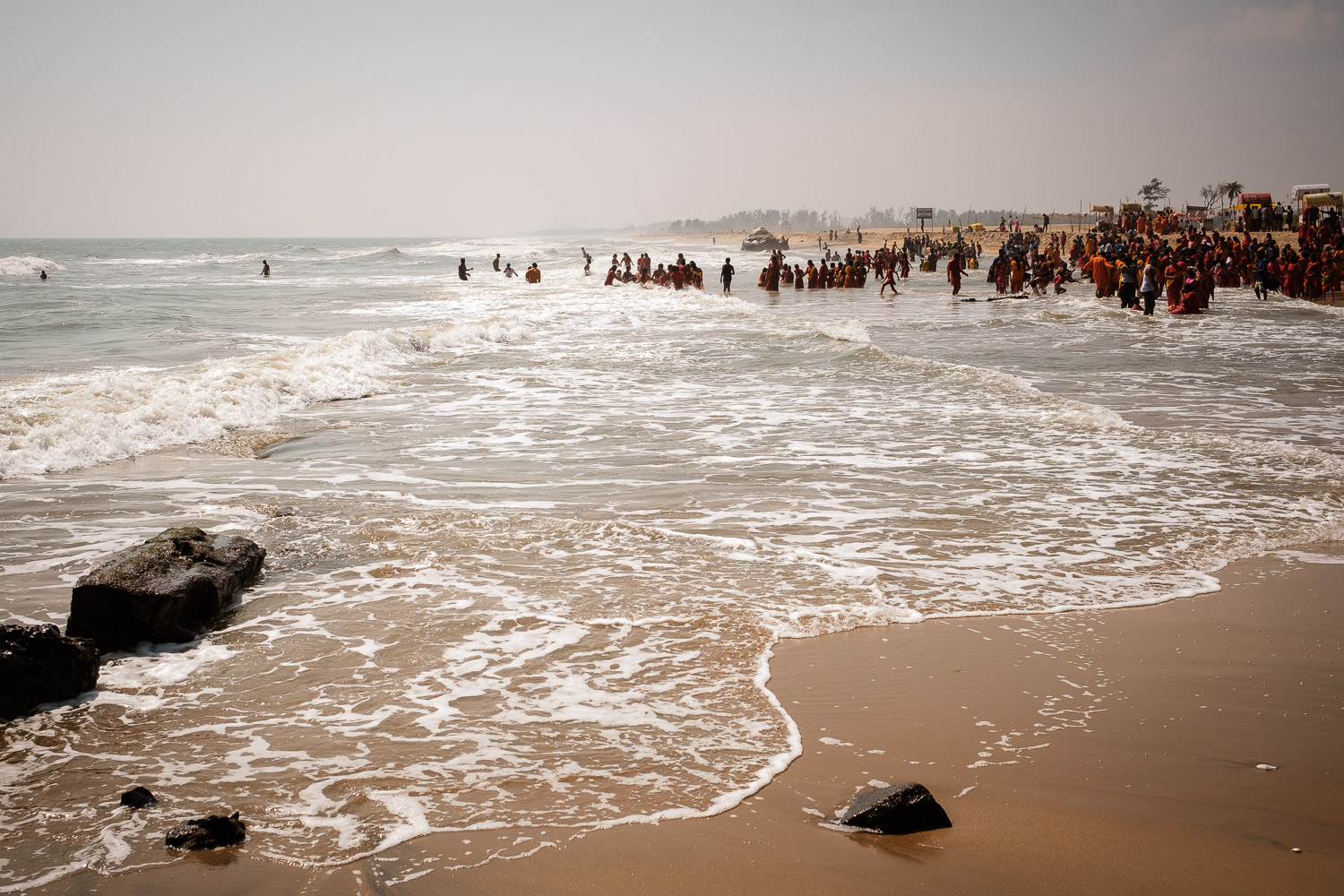 Traveling to Varanasi
Scroll to top
Manage Cookie Consent
To provide the best experiences, we use technologies like cookies to store and/or access device information. Consenting to these technologies will allow us to process data such as browsing behavior or unique IDs on this site. Not consenting or withdrawing consent, may adversely affect certain features and functions.
Manage options Manage services Manage vendors Read more about these purposes
View preferences
{title} {title} {title}